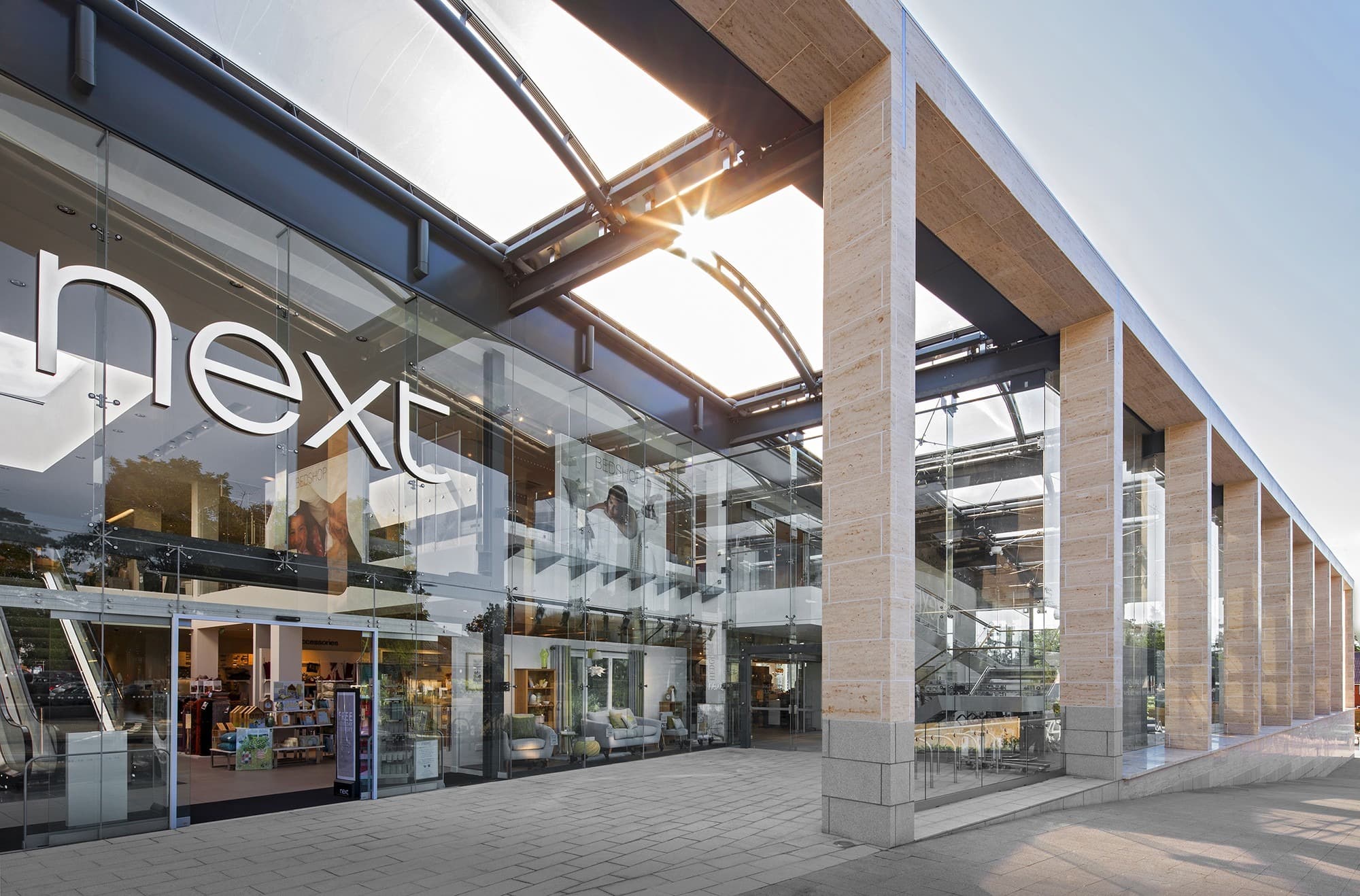 The Next flagship store in Hedge End represents the pinnacle of their in-store environment.  It blends sleek, minimal surfaces with cutting edge lighting and features.

The exterior showcases the signature monolithic style of Stanton Williams.  Narrow beam LED uplighters highlight the columns and define the canopy surfaces, making for a dramatic approach to the store.

The architectural strength continues into the store, where pure surfaces combine to form soaring spaces.  The purity of the ceilings in the atria is maintained by leaving the lighting scheme sparse.  Only 2 recessed troughs house all of the high-powered LED spotlights.  Due to the full height planar glazing, the spotlights have to compete with a huge amount of natural light.  Therefore, these spotlights use 2 different beam angles.  One, to create punchy accent lighting for any merchandise placed in the atria spaces; and two, to create a subtle ambient light after the sun goes down.

A key difference between Hedge End and previous stores is the Conservatory, leading out to the Garden Centre.  Without a solid ceiling to recess luminaires into, we had to ensure that there would be full lighting coverage.  The Conservatory housed kitchens, outdoor furniture and the large range of accessories.  By designing bespoke brackets to attach to the structural steelwork, we were able to mount track over the majority of the Conservatory space.  Consequently, we provided an accent-driven design that eases the transition between the brightest parts of the store and the more subdued external Garden Centre area.

In their pilot Garden Centre scheme, we had created an all-accent lighting scheme.  For Hedge End, Next were keen to keep this tight focus on product.  In contrast, we needed to boost ambient light levels to reveal more of the impressive architecture.  To achieve this, large LED floodlights were mounted in quadruples at high level above the ground.  Arrayed to provide uniform light to the entirety of the external space, these create a suitable base light level.  Narrow beam fittings, mounted to pergolas and dividing walls, introduce a dramatic element that elevates this above any other garden centre.


David Jones is one of the oldest trading department stores in the world. Within a complete redesign of the well known and loved Australian brand, LAPD revitalised the retail lighting […]