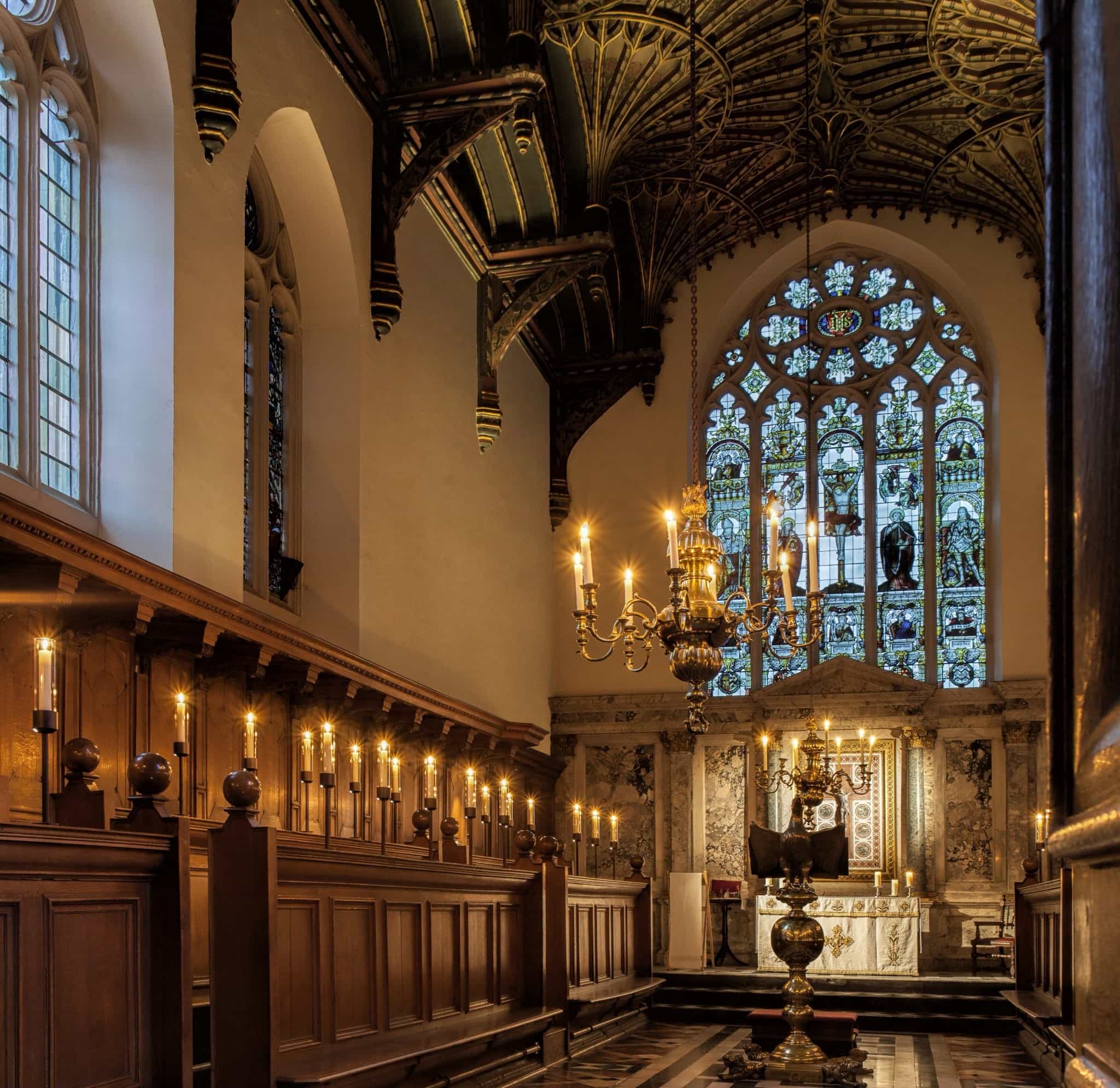 The main chapel is the undoubted showpiece of the project.  It is designed to bring the chapel into the 21st century while simultaneously returning it to its classical beginnings.  The scheme conceals cutting edge technology within the existing fabric of the building while improving on the previous lit environment in every way.

To make the space more welcoming, the walls have been uplit with high power LED strip.  This provides ample ambient lighting for the whole chapel.  Installed alongside the LED strip, adjustable narrow beam LED floodlights make the beautiful ceiling glow. Both luminaire installations are invisible to the congregation.

Two LED projectors, mounted high on the wooden structure above the pews, light the altar. With a bespoke bronze finish, these projectors blend into their surroundings.  On-board dimming and adjustable beam angles allow for easy adjustment to the lighting on the altar and the reredos.

An identical LED projector, mounted invisibly into an aperture in the ceiling, gives glare-free light to the Chaplain’s lectern in the centre of the aisle.

Improving the way the bookstands in front of the pews were lit formed a critical part of the scheme.  Prior to our design, miniature standard lamps lit the bookstands and blocked views of the aisle and altar.  The bookstands now feature all-new bespoke candleholders with integrated LED technology.  Milled from solid aluminium with a wet-sprayed phosphor bronze finish, the candleholders showcase clean aesthetics and precision manufacture.  They house elegant oil-filled candles within a beautiful glass cylinder.  Two small LEDs with flush lenses sit below the glass, mounted into the body of the candleholder at an angle to eliminate glare.  These illuminate the bookstands with much more light than in the previous scheme.  Achieved without interference to the fabric of the bookstands, the new candleholders ensure uninterrupted views across the chapel while providing incredible ambiance and functionality.

Throughout the project, our goal was to be faithful to fabric of the building and to enhance its use, while providing the highest possible quality of light. Now an all-LED scheme combining with all of the drama and ambiance of candlelight, Brasenose showcases the ultimate in chapel lighting.


In 2007, LAPD took part in a landmark lighting event named Switched On London. A selection of London landmarks, each assigned to a lighting consultancy, received a new lighting scheme. […]